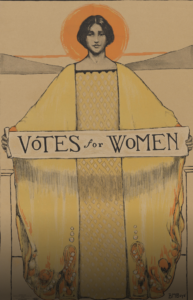 The 19th- and early 20th-century women’s rights movement involved a diverse activist community. Multiracial, multiethnic, and multipolar, women from all walks of life took part in the women’s rights movement in the United States. This reading and discussion series will step outside the received history of the women’s rights and woman suffrage movement to explore the diversity of people and ideas that animated it. Participants will explore lesser-known aspects of the movement while being introduced to people and ideas outside of the mainstream understanding of the suffrage era. Facilitated by Dr. Jenny Lloyd, professor of history emerita at SUNY Brockport, and Cheryl Sampson, graduate student in public history at SUNY Brockport whose work focuses on the lives of African Americans in late 19th and early 20th century Rochester.

REGISTRATION IS REQUIRED. Registrants will receive a link to the four weekly Zoom meetings (October 22 – November 19; no meeting November 5) in an email that will be the day before the first discussion. Readings will be provided to participants in advance of each meeting. Space is limited.